Tirana (alb.Tiranë)is the capital and largest city of Albania. Tirana became Albania’s capital city in 1920. The population of the city (2015)is slightly above 600.000 and the municipality of Tirana, has a total population of 800.000 people.

The city is mostly surrounded by hills, with Dajti Mountain on the east and a slight valley opening on the north-west overlooking the Adriatic Sea in the distance. The Tiranëriver runs through the city, as does the Lanë stream.

Albanian is the official language of Albania.Predominant religionin Tirana is Muslim (70%) while Albanian Orthodox makes 20% and Catholic 20%. Between years of 1967 and 1990 religious observances were prohibited.

The Albanian Lek(Leke) is the official currency of Albania.

Tirana has a Mediterranean climate with hot summers and mild winters. The summers are relatively dry while the winters are quite wet. 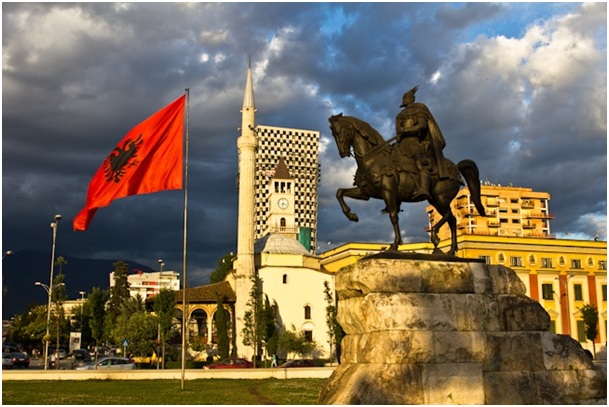 Although Tirana is young and relatively new city, its origins are quite old - the area occupied by Tirana has been populated since the Paleolithic era, dating back 10.000 to 30.000 years ago! This is suggested by evidence from tools excavated near Mount Dajt's quarry and in Pellumba Cave. As argued by various archaeologists, Tirana and its suburbs are filled with Illyrian toponyms, as its precincts are some of the earliest inhabited regions in Albania. The Illyrians called the settlement Tërana.

The oldest discovery in downtown Tirana was a Roman house, later transformed into an aisleless church with a mosaic-floor, dating to the 3rd century AD, with other remains found near a medieval temple at Shengjin Fountain in the eastern suburbs. A castle possibly called Tirkan or Theranda, whose remnants are found along Murat Toptani Street, was built by Emperor Justinian in 520 A.D. and restored by Ahmed Pasha Toptani in the 18th century. The area had no special importance in Illyrian and classical times.

The name Tirana has been used in the present form from at least beginning of the 15th century as mentioned in a Venetian document of 1418. Records of the first land registrations under the Ottomans in 1431-32 reveal that Tirana then consisted of 60 inhabited areas, with nearly 1000 houses and 7300 inhabitants.

In 1510, Marin Barleti, an Albanian Catholic priest and scholar, in the biography of the Albanian national hero Skanderbeg, Historia de vita et gestisScanderbegiEpirotarumprincipis (The story of life and deeds of Skanderbeg, the prince of Epirotes), referred to this area as a small village.

FOUNDING OF THE CITY

A century later in 1583 the population had tripled reaching 20.000 inhabitants Modern Tirana was founded in 1614 by SulejmanBargjini ‘Pasha’, a local ruler from Mullet who constructed a mosque, a bakery and a hamam (Turkish sauna).During this period, the Et'hemBey Mosque, built by MollaBey of Petrela, was constructed. It employed the best artisans in the country and was completed in 1821 by Molla's son Etëhem, who was also SulejmanBargjini's grandnephew. 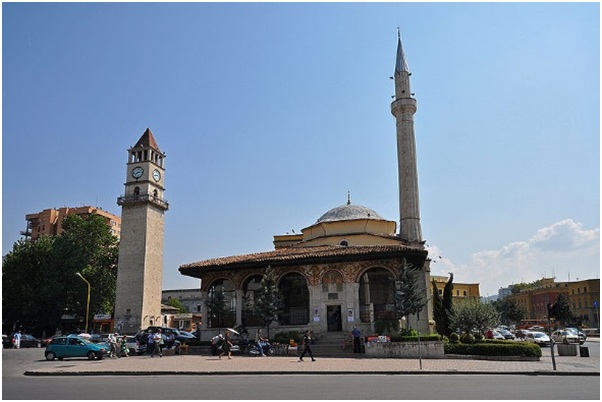 In 1800, the first newcomers arrived in the settlement, the so-called ortodoksit. They were Vlachs from villages near Korçë and Pogradec, who settled around modern day Park on the Artificial Lake. They started to be known as the llacifac and were the first Christians to arrive after the creation of the town. After Serb reprisals in the Debar region, thousands of locals fled to Tirana. In 1807, Tirana became the center of the Sub-Prefecture of Krujë-Tirana. After 1816, Tirana languished under the control of the Toptani family of Krujë. Later, Tirana became a Sub-Prefecture of the newly created Vilayet of Shkodër and Sanjak of Durrës. 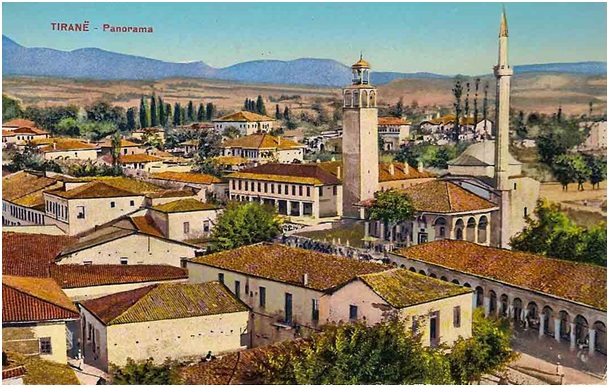 In 1889, the Albanian language started to be taught in Tirana's schools, while the patriotic club Bashkimi was founded in 1908. On 28 November 1912, the national flag was raised in agreement with Ismail Qemali. During the Balkan Wars, the town was temporarily occupied by the Serbian army and it took part in uprising of the villages led by HaxhiQamili. In 1917, the first city outline was compiled by Austro-Hungarian architects.

On 8 February 1920, the Congress of Lushnjë proclaimed Tirana as the temporary capital of Albania, which had acquired the independence in 1912. The city retained that status permanently on 31 December 1925. In 1923, the first regulatory city plan was compiled by Austrian architects. Well known architects of the Mussolini period in Italy Florestano de Fausto and Armando Brasini, where the masterminds which build the main square, which today bears the name of Albanian National Hero Scanderbeg, the huge boulevard, ministry buildings, national bank, the town hall and the Palace of Brigades (former royal Palace, today Presidential Palace).

In the political sphere, Tirana experienced such events as intermittent attacks on the mountain pass of Shkalla e Tujanit (Tujan's Staircase) by the army of the Kingdom of Serbs, Croats and Slovenes and forces loyal to Zogu. In 1924, Tirana was at the center of a coup d'état led by Fan S. Noli. Since 1925, when they were banned in Turkey, the Bektashis, an order of dervishes who take their name from Haji Bektash, a Sufi saint of the 13th and 14th centuries, made Tirana their primary settlement. Modern Albanian parliamentary building served as a club of officers. It was there that, in September 1928, Zog of Albania was crowned King Zog I, King of the Albanians.

In 1939, Tirana was captured by Fascist forces appointing a puppet government. In the meantime, Italian architect GherardoBosio was asked to elaborate on previous plans and introduce a new project in the area of present-day Mother Teresa Square. By the early 1940s, the southern portion of the main boulevard and surrounding buildings were finished and renamed with Fascist names. A failed assassination attempt was made on Victor Emmanuel III of Italy by a local resistance activist during a visit in Tirana. 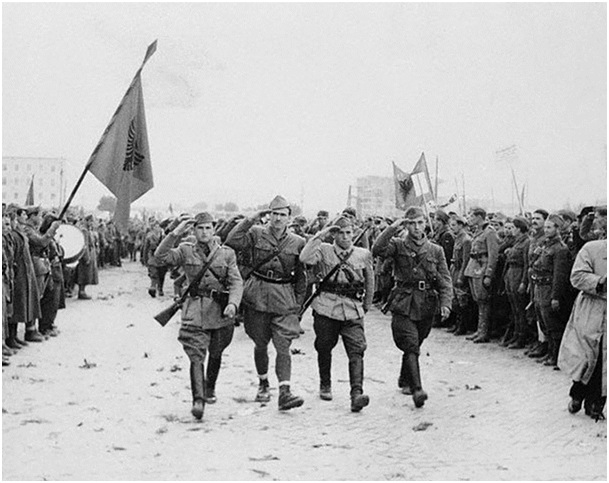 The town soon became the center of the Albanian communists, who mobilized locals against Italian fascists and later Nazi Germans, while spreading ideological propaganda.

On 17 November 1944, the town was liberated after a fierce battle between the Communists and German forces. The Nazis eventually withdrew and the communists seized power.

From 1944 to 1991, the city experienced ordered development with a decline in architectural quality. Massive socialist-styled apartment complexes and factories began to be built, while Skanderbeg Square was redesigned with a number of buildings being demolished. For instance, Tirana's former Old Bazaar and the Orthodox Cathedral were razed to the ground for the erection of the Soviet-styled Palace of Culture. The Italian-built municipal building was detonated and the National Historical Museum was constructed instead, while the structure housing the Parliament of Albania during the monarchy was turned into a children's theater. 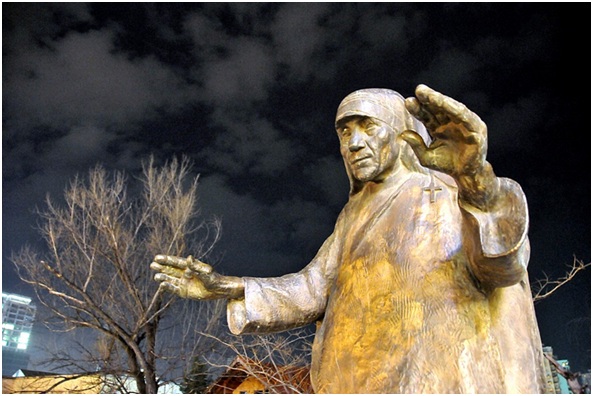 The northern portion of the main boulevard was renamed Stalin Boulevard and his statue erected in the city square. As private car ownership was banned, mass transport consisted mainly of bicycles, trucks and buses. After Hoxha's death, a pyramidal museum was constructed in his memory by the government. 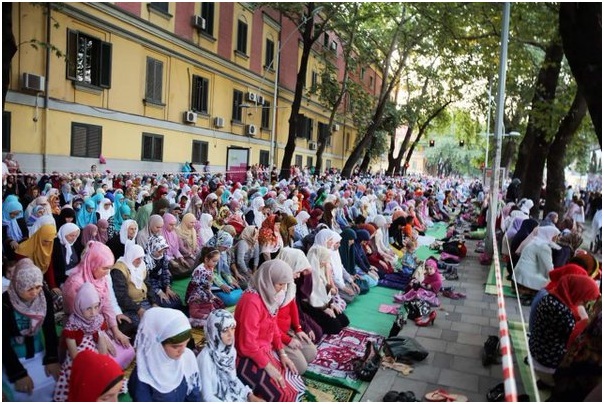 Prior to and after the proclamation of Albania's self-isolationist policy, a number of high-profile figures paid visits to the city, such as Soviet leader Nikita Khrushchev, Chinese Premier Zhou Enlai and East German Foreign Minister Oskar Fischer. In 1985, Tirana served as the ceremonial venue of EnverHoxha's funeral. A few years later, Mother Teresa became the first religious figure to visit the country following Albania's long declared anti-religious atheist stance. 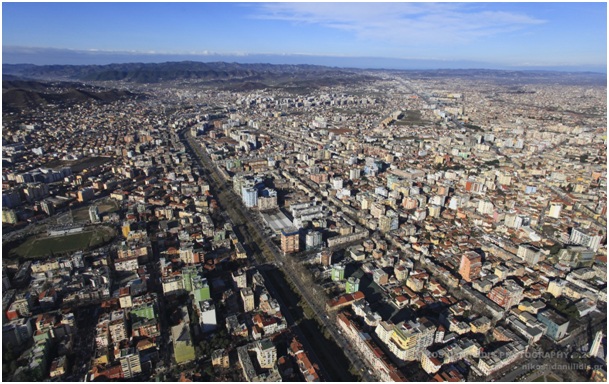 Today Tirana is the center of the political, economic, and cultural life of the country with over 800.000 inhabitants. In the last few years Tirana has seen substantial changes in its appearance. The dull communist-style apartment blocks have been painted over in bright colors and abstract patterns by an artist turned Mayer. 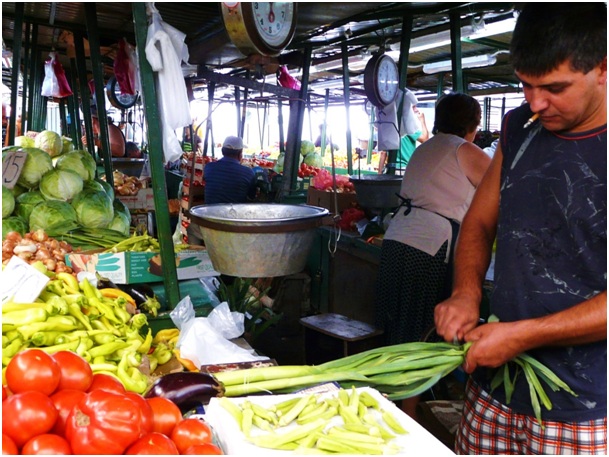 This is not only a quick fix but also an uplifting experience for inhabitants and visitors alike. Furthermore it has seen an increased development in modern infrastructure contributing to the city’s metropolitan look.